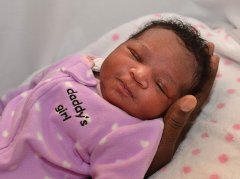 My labor & Delivery story was definitely like something out of a movie. I will give you all the raw and uncut version of how it all went down some of you might be grossed out but this is my story and how it all happened no sugar coating.

I decided to google some ways to naturally induce labor because I just could not deal with the misery of being pregnant any longer. At 39 weeks in my pregnancy I was considered pretty much full term, having the baby at 39 weeks would be safe. There were so many natural remedies that were suppose to help induce labor, there were teas, supplements,drinks, etc. there was one thing that I decided to do that was on the list of things and that was sex. I decided to have sex, yes sex!

Apparently, sex as a means of getting labor started is thought to work in three ways: first, orgasm may help to stimulate the uterus into action. Secondly, sex can trigger the release of oxytocin, and third, semen contains a high concentration of prostaglandins which may help to ripen or soften the cervix. Honestly, I did not think having sex was going to work at all because I had been having sex throughout my entire pregnancy. But I still decided to do it anyway since my due date was right around the corner.

After having sex I noticed that my contractions started to become a little bit more frequent than usual, but it was not to the extent where I would need to go to the hospital. So, I decided to sleep it off, I took a benedryl, but I ended up waking up in the middle of my sleep due to the pain of the contractions I was having. I called the doctor on-call and explained that my contractions were getting intense but that the intervals of the contractions were not long enough. They told me to still come in but I decided to wait it out because I did not want to travel to the hospital only to be sent back home due to false labor. I laid down for awhile and even took a hot shower to calm me down nothing seemed to work. The pain kept getting worse, I called my husband at work, and explained to him what was going on, he told me that he would leave once one of his staff came to cover for him. He stated that he could not leave just yet because he is the the supervisor, he asked me if I could hold on just a little bit longer.

So, I agreed because I wanted him to be by my side. But then the pain became unbearable, and my water broke. I felt a pop! It felt like a balloon had popped and all this fluid came flowing out everywhere. I called him and was screaming hysterically, I told him my water broke. My brother was here with me so he could watch my older daughter Taliah. I screamed, telling him that my water broke, and he said, “sis should I call 9-1-1?” I told him that I was waiting for my husband.

Finally, my husband had arrived, my brother helped me get downstairs to the car, but I was in so much pain that I could not sit down in the car at all. Instead of sitting I was hunched over facing the passenger seat. As we were driving, I felt excruciating pain and pressure, and felt like I needed to make a bowel movement. The pressure to push kept getting worse I was hunched over in the car and felt like I needed to push. All that kept running through my mind was, “I’m about to take a number 2 and everyone is gonna see” but at that point I did not care.

We arrived at the front of the hospital, and my husband got out of the car and ran to grab a wheel chair; while he was gone, I felt an extreme need to push really hard, and when I touched down there, thinking there would be poop it was the baby’s head. I started freaking out, luckily I spotted a nurse walking to the ER. I yelled, saying please help me I’m having my baby in my car.
She rushed to grab some help from the ER, the next thing I know all these doctors and nurses come running to my car.

My husband came with the wheel chair at that point the baby’s head was already out and after 5-10minutes of pushing my baby had arrived in the car. They cut the cord and wheeled me into the hospital on stretcher, when I arrived, I then pushed out the placenta. Just like that I gave birth to a beautiful baby girl, with no medication, no epidural all, I mean did I really even have a choice? Everything happened so fast I never thought I could ever have a natural birth but I did it! 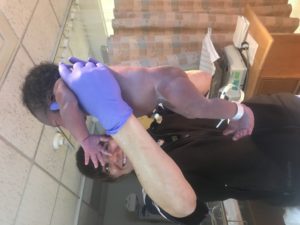 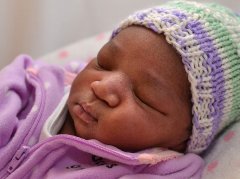